The most beautiful squares and fountains of Rome

Squares and Fountains in Rome

Sometimes noisy, always busy, at times intimate. Embellished with baroque fountains, obelisks, and monuments, Roman squares are the artistic and architectural representation the social and cultural life of the city. They’re the best way to get to know the eternal city and the marvels it has to offer. Here’s a list of the most beautiful squares and fountains in Rome.

All situated on a straight line, these three squares connect the Flaminio neighborhood to the ancient city through the busy shopping hub of Via del Corso and the city center. Piazza del Popolo , from which the Trident branches out, takes its name from the church of Santa Maria del Popolo. The elliptical shape, the obelisk built by Ramesse II, and the fountain create an exquisite and spacious landscape. Piazza Colonna , half-way through Via del Corso, takes its name from the towering marble column of Marcus Aurelius. Piazza Venezia , which connects Via dei Fori Imperiali and the ancient city with Via del Corso, hosts the majestic Altare della Patria and the Vittoriano Complex. This square was used by Mussolini to deliver his speeches, and has now become one of the main traffic arteries of the city. 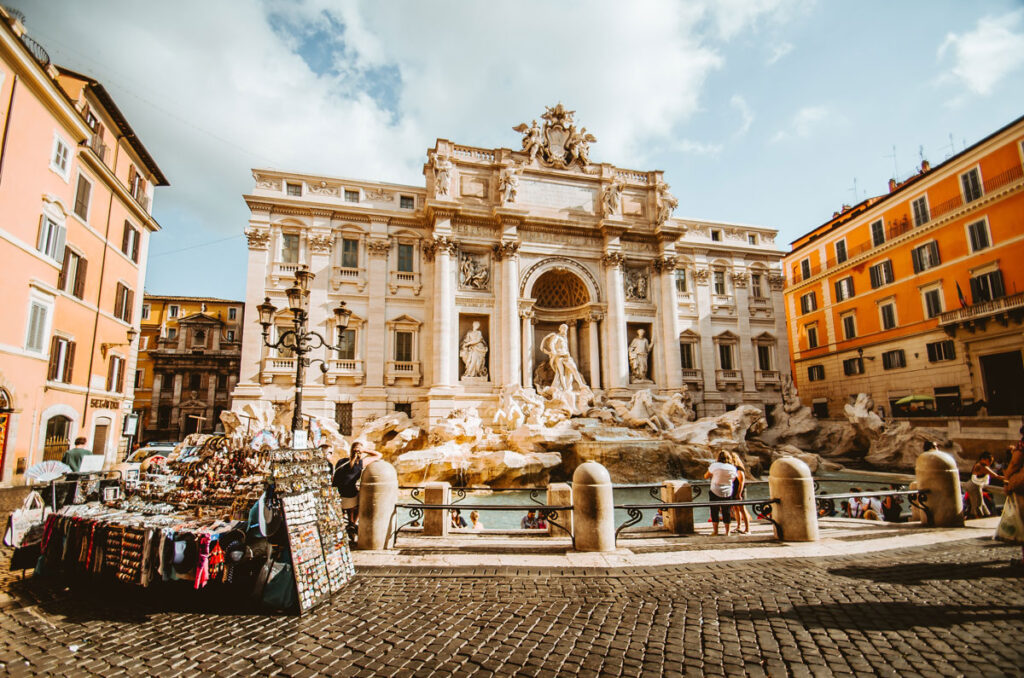 Nearby and still in the city center, Piazza di Trevi bustles with tourists from all over the world. The small square is usually packed with visitors throwing pennies in the waters of the homonymous and celebrated baroque fountain, setting of the cult movie La Dolce Vita . A little further on, Via del Tritone connects Piazza di Trevi with Piazza Barberini and Bernini’s masterful Fontana del Tritone . In a short walking distance, you can reach Piazza di Spagna, one of Rome’s most famous squares: characterized by the Barcaccia Fountain – sculpted by Pietro Bernini, the father of Gian Lorenzo Bernini – and the Spanish steps, this square is one of the busiest, yet most romantic spots in the city. Walk up the stairs and reach the Trinità dei Monti Church and the Sallustiano Obelisk , turn around, and savor the panorama of the city and the eternal splendor of its red rooftops and golden bell towers.

The exquisite Piazza della Bocca della Verità , located right in front of the Tiberina Island, takes its name from the famous marble mask known as the Mouth of Truth, conserved under the porch of the small Church of Santa Maria in Comedian, always busy with curious visitors. In the square in front of the church you will see the beautiful Temple of Hercules . The Capitol Square ( Piazza del Campidoglio ) is undoubtedly among the most beautifully designed squares in Rome. In fact, its fascinating angles and perspectives were partly designed by Michelangelo. Located on top of the homonymous hill, in its center towers a reproduction of the equestrian statue of Marcus Aurelius. In the corner between Palazzo Sanatoria and Palazzo Nuovo, there is a statue of the Capitoline Wolf , who, according to the legend, saved Romolus and Remus, who then founded Rome. In the same square there are the Capitaline Museums, the most ancient public museum in the world. 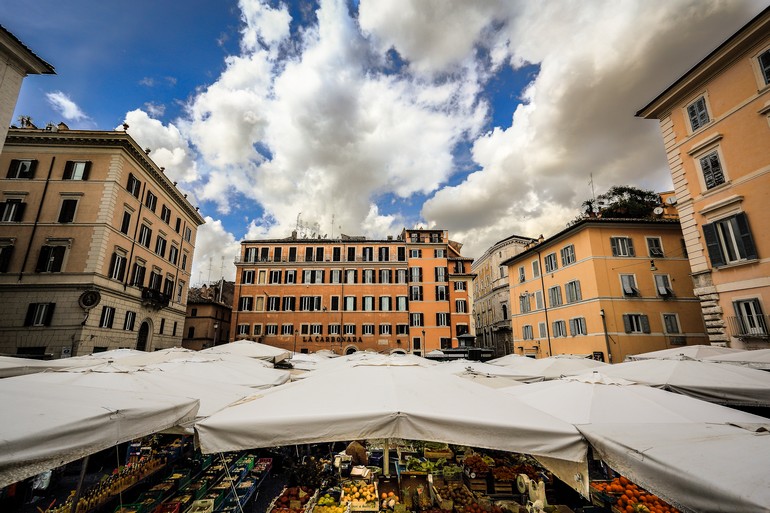 Situated in the Parione district, Piazza Navona is one of the most fascinating places in the city. Always crawling with tourists and street artists, this square is characterized by the presence of the quintessentially baroque Fontana dei Fiumi complex, sculpted by Gian Lorenzo Bernini, representing the four main rivers of the world. Close by, Piazza Campo de’ Fiori hosts one of the main hubs of Rome’s nightlife, but most importantly the prettiest and eclectic open-air market of the capital. The square is defended by the statue of Giordano Bruno, an Italian philosopher and revolutionary thinker, who was, obviously, burned at the stake for heresy in 1600. Piazza della Rotonda , reachable by crossing Corso Vittorio Emanuele, hosts the ancient Pantheon , one of the most remarkable and ancient monuments of the city. The square also hosts a Renaissance fountain surmounted by an Egyptian obelisk.

On the other side of the Tiber River, respectively in the Trastevere neighborhood and in the Vatican , Piazza di Santa Maria in Trastevere and Piazza San Pietro are waiting to be discovered. Piazza di Santa Maria in Trastevere is the emblem of the social square: people riunite here during summer evenings, tourists sit under the shade of and sip on an espresso, and folks party in the nearby Bar San Calisto . The beautiful Basilica of Santa Maria in Trastevere hosts some marvelous medieval mosaics and frescoes, and the central fountain is said to be the oldest in the whole city. Saint Peter’s Square , instead, is the undisputed emblem of Christianity and undoubtedly one of the most astonishing squares in the world. The columnate designed by Bernini seems to open in and embrace to the faithful coming from all over the world to visit the Vatican City.