A Tour of Bernini's Masterpieces in Rome

On the Steps of Bernini

Gian Lorenzo Bernini, one of the greatest exponents of Italian Baroque art, is known and appreciated all over the world for his dynamic, complex, and scenically surprising works. Bernini spent many years in Rome, creating numerous works commissioned by famous people of the time, including some popes. These works are scattered around the city, or kept safe in some of the most beautiful museums of the capital. An entire trip could be dedicated only to this artist, but we’ll offer you a guide to the main places to visit in order to admire some of his most beautiful works during your stay at the Atlante Star Hotel. 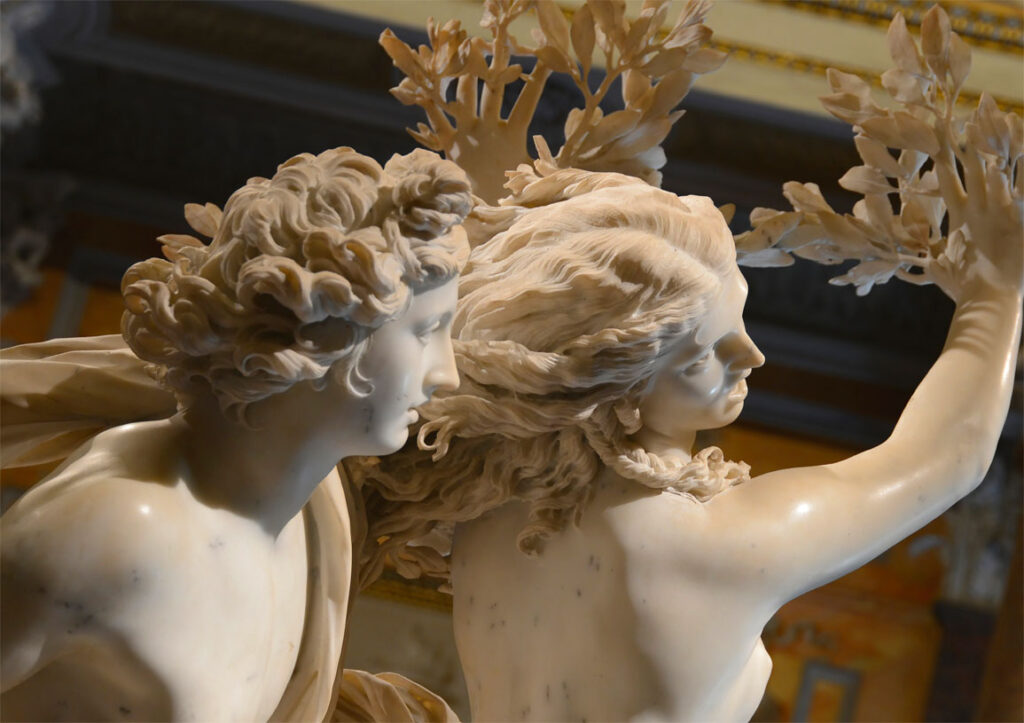 The museum is located in the beautiful Villa Borghese, one of the most important parks of the city, situated in the center. The Borghese Gallery hosts a large collection, and in addition to some of Bernini’s most important contributions to Italian art, there are also some works by artists of the caliber of Titian, Canova, and Caravaggio. Due to the large influx of visitors, remember to book your visit in advance. Here you will admire the first statue made by Bernini, the Capra Amaltea: this 45cm sculpture, was created between 1609 and 1915, and was initially believed to be an Hellenistic statue. It represents a young Jupiter and a faun being fed by the goat Amaltea, a Greek mythological character who was thoughts to live on the island of Crete. You can also admire the Rape of Proserpina, probably the most famous work by Bernini. This large statue, made between 1621 and 1622, depicts the god Pluto in the act of kidnapping Proserpina, a young woman he had fallen in love with. This sculptural complex is represented by its dynamism and eroticism, made evident by the technique of the artist in making the marble almost “soft” to the sight. In the Borghese Collection you will also find the David, a statue with a biblical theme: you will see the protagonist of the story engaged in throwing his shot to the giant Goliath, with a concentrated expression and a sinuous and elegant position. Also the statue dedicated to Apollo and Daphne, depicting the moment of the transfigurations of the nymph in laurel, is in this collection. 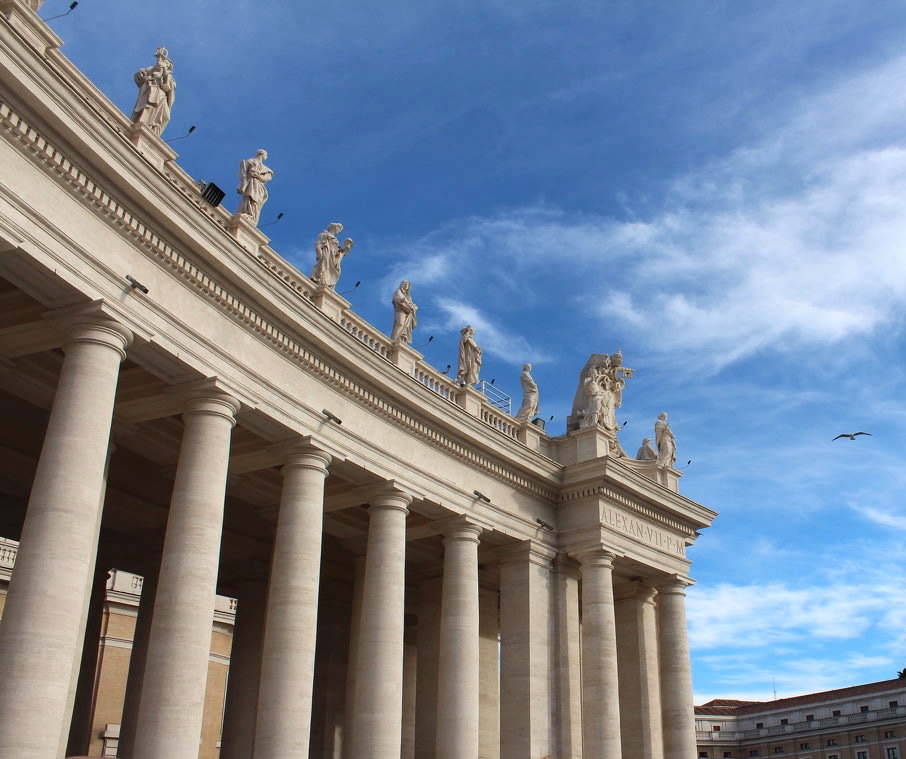 Bernini worked a lot on Saint Peter’s Basilica, where he produced many works of rare beauty: in 1633 he created the sumptuous – and typically baroque – 30-meter canopy that you will can see in front of the altar of the church; in 1657 he worked on the doric colonnade of Saint Peter’s Square; and from 1656 to 1657 he designed the sumptuous Chair of Saint Peter, believed to contain the relics of the Saint. Inside the Basilica, Gian Lorenzo Bernini also worked on the funerary monument to pope Urbano VIII, and the monument to Pope Alessandro VII. 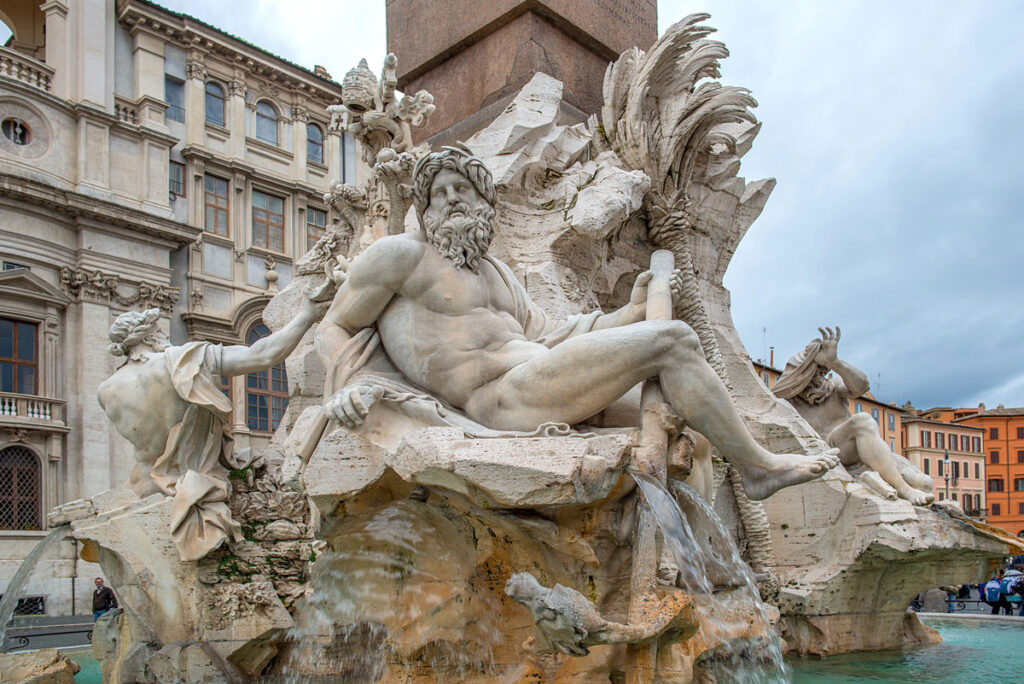 n the church of Santa Maria delle Grazie in the Trionfale area, and near the Vatican Museums, you can find a splendid work of marble and gilded bronze, the  Transverberation of S. Teresa d’Avila, sculpted between 1647 and 1652 by the artist. It depicts the theatrical and scenographic transverberation – in Catholic mysticism, the piercing of the heart with a sharp object by an angelic creature or Christ – of the Saint. In Piazza Navona, situated in the historic center of the city, you can admire the majestic Fountain of the Four Rivers, created between 1648 and 1651. The work portrays the rivers Nile, Danube, Ganges and the Río de la Plata, impersonated by four imposing male figures. In Piazza Barberini, one of the main squares of the historic center of Rome, instead, you will find the Tritone Fountain. Sculpted in travertine marble by Bernini between 1642 and 1643, the fountain depicts a Triton, a minor sea-God in ancient Greco-Roman mythology. In the same square, you will find Palazzo Barberini, to which the artist worked in 1929 as a site manager.